The L.C. Whitford Company, Inc., is a general contractor specializing in bridge construction.

Focused in the Northeast

The L.C. Whitford Company, Inc., is a general contractor specializing in bridge construction. This family-run business, based in Wellsville, NY, operates primarily throughout New York State and Pennsylvania but has worked in 26 different states. Throughout its 100 plus year history, L.C. Whitford has built many landmarks of Western New York, from bridges and highways to libraries and hospitals, and is known as one of the area’s most respected and innovative builders.

In addition to construction, L.C. Whitford operates a materials company, which manufactures pre-stressed concrete beams, precast box culverts, and rebar fabrication. It also operates an equipment company, which deals in the sale and rental of forestry equipment throughout New York State and Pennsylvania. These branches serve to support and streamline our own projects, and also supply materials and equipment to other companies.

The firm’s office is on North Main Street in Wellsville, NY, across the street from the David A. Howe Public Library. This library, built by LCW in 1935, is considered one of the most beautiful and recognizable architectural landmarks in the Southern Tier, a testament to the quality of work that The L.C. Whitford Company strives to achieve in each of its endeavors.

In 1916, Langford Clinton Whitford founded The L.C. Whitford Company (LCW) in Allegany County to provide residential and commercial construction services to the communities of Western New York. One hundred plus years and four generations later, this family-operated company remains committed to offering quality construction of buildings, bridges, and highways, while continually expanding and exploring new markets and opportunities.

During L. Clinton’s (Ford) time as president, LCW erected many important buildings throughout Western New York, including the Allegany County Courthouse. He eventually moved away from residential construction but continued to build commercial and institutional buildings. Ford died in 1937, and he passed the thriving company on to his son, L. Rodman “Rod” Whitford.

Under Rod’s leadership, LCW continued to expand. Over the next few decades, the firm constructed buildings at the Alfred University Campus and erected several schools throughout the Southern Tier. Upon Rod’s death in 1969, L. Chandler “Chan” Whitford took over the company.

Chan’s tenure as president was a time of great changes for the company. In 1972, the company began to shift its primary focus from buildings to bridges, due in part to the high demand for bridges in the aftermath of 1972’s Hurricane Agnes. Bridge construction and repair remains the specialty of LCW today, though the company continues to work on highways and buildings. Major building projects from the Chandler Era included a 200,000 square-foot manufacturing facility for Bush Industries in Jamestown, a 95,000 square-foot Tracewell Electronics plant in Cuba, and the Wende Correctional Facility in Alden, NY.

January 2006, Chan’s eldest son, Langford Bradley “Brad” Whitford was made President of the company. Under Brad’s leadership, the company’s 100-plus years of success continues. LCW’s New York Division performs dozens of heavy/highway projects in New York and Pennsylvania and power plant projects throughout the northeast annually. LCW’s Atlanta Division is expanding its market and performing heavy/highway projects in the southeastern states. Newer endeavors, such as railroad work and waterproofing and containment, have taken LCW to all states east of the Mississippi River. LCW is consistently recognized as one of the largest construction companies in Western New York, with the highest number of employees and the lowest percentage of subcontracted work (about 10%). The firm has been included in Business First’s list of the Top Private Companies in Western New York for many years.

LCW’s bridge projects include the twin 2,600-foot steel/concrete composite bridges on I-86 (formerly NYS Rt. 17) in Allegany, NY; major steel replacement and repairs on the three-span overhead truss Bridge Street Bridge in Corning, NY that was completed 53 days ahead of schedule; the total removal and replacement of a 660-foot steel trestle railroad bridge without disrupting train traffic in Westfield, NY; the removal and replacement of over 1,200 structural bearings on several bridges on Rt. 198 (Scajaquada Expressway) in Buffalo, NY; and the three-span adjacent pre-stressed box beam 5th Avenue Bridge in Warren, PA.

Other unique bridge projects include a Bascule bridge in Norfolk, VA, a lift bridge in Sandusky, OH, and a timber trestle bridge in Chicora, PA.

The L. C. Whitford Co., Inc. (LCW) has a long history of building roads in Western New York. Since the mid-’70s, LCW has performed a variety of work on countless state, county, and town roads. These projects have ranged from simple drainage improvements and shoulder rehabilitation to major reconstruction of State routes through the center of Towns and Villages.

The L. C. Whitford Co., Inc. (LCW) has a rich history of quality commercial building projects dating back over 100 years. These projects range from the many enduring local landmarks, including the Allegany County Courthouse, the David A. Howe Library in Wellsville, NY and many of the buildings on the Alfred University Campus, to state-of-the-art manufacturing and institutional buildings and parking garages.

With support services that include a materials and precast/prestressed concrete company, equipment company, rebar and steel fabricating facilities, and a staff of dedicated and experienced construction professionals, LCW has the resources to ensure construction projects of superior quality and value.

Some of LCW’s notable commercial building projects include a $20 million medical facility at Wende Correctional in Alden, NY; a 64,000 square-foot rail car refurbishing plant for Alstom Transportation in Hornell, NY, a 2,000-car parking garage at the Seneca Casino in Salamanca, NY, and a 621 car parking garage at the Seneca Buffalo Creek Casino in Buffalo, NY. LCW has also been involved in many school renovation projects in Western New York and US Army Corps of Engineers projects involving dams and waterways. 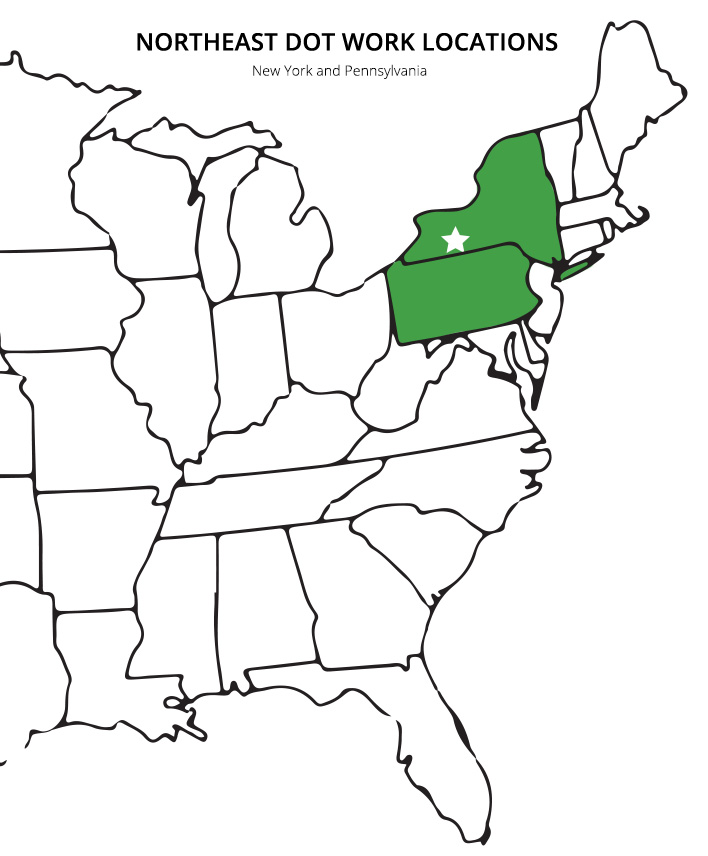 Contact our team to learn more about how our services are the right fit for you. With over 100 years of experience, we’re the best contractor to help set you up for the next 100.